FLAMMENGOLD has a dressage breeding index of 125.

Flammengold had a good performance test with high rideability points. South German Dressage Champion 2000 with top mark of 8 at Advanced Medium level. Has also won and been placed at PRIX ST GEORGES and INTERMEDIARE with high marks. He is very laid back and straightforward to ride. Has won 10 Prix St Georges Classes and 2 Inter 1.

Flammengold's progeny have his dark colour and kind temperament. Foals have won top shows. Frank Sinatra is an exciting prospect in Germany Having won at Prix St Georges and Intermediare I, and in England Fabioso ridden by Paul Hayler is also winning at Prix St Georges and now Intermediare I. See recent Horse and hound write up. And tipped as a potential Olympic horse.

Flammengold standing at stud in Germany but will be back here May 2012.

Frank Sinatra competing at Grand Prix and also licenced as a breeding stallion in Germany.

2012 & 2013 Flammengold started the stud season in Germany by popular demand before returning to England for stud season May to August. 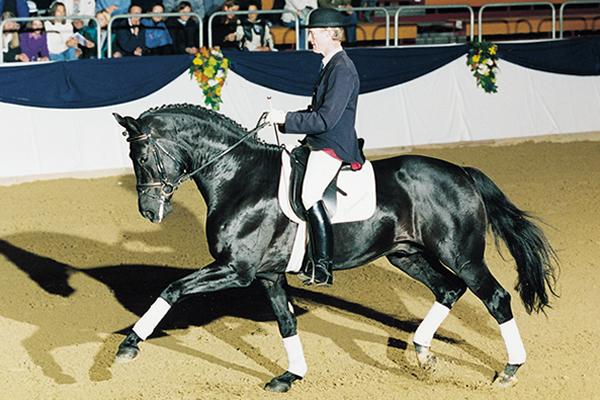 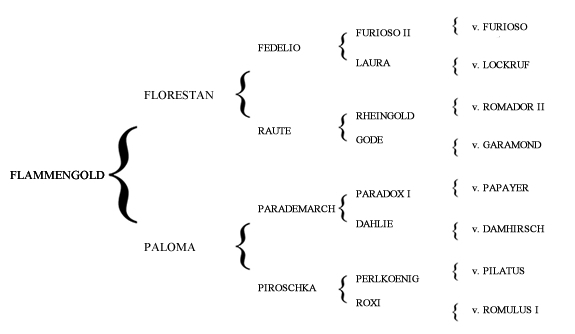 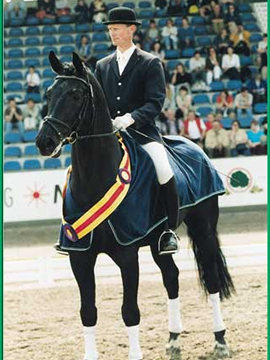 Internationally renowned as a dressage sire. Sired 50 licenced Stallions and 200 State Premium Mares. Progeny competing internationaly Dressage and to date have won €256,000. Also had many National champions. Winner of his Licencing and performance test with outstanding Dressage 127.15 and jumping 128.69 marks. He has a very high Dressage breeding index of 166.

Was the most popular stallion in the Rhineland region for many years, but is most famous for sireing Florestan I and II.

Famous Foundation Sire his blood is to be found in most modern warm blood pedigrees today.. Won his performance test and has sired 70 Licenced Stallions, 200 State Premium Mares. Also siring top Sports Horses and the Olympic Medal Winners in Show Jumping. He was the Top producing sire of winners from 1979 to 1989.

Sired nine Graded Stallions and was famous for siring international Show Jumpers who won over 880,000DM as well as some outstanding Dressage Horses.